I wasn't particularly worried about lodging when I got to Cork, but I had a sense of urgency as I set out to find a place to stay.  After a full week of hostel living, I had even mentally justified spending a little extra for a private room at a bed and breakfast.  I entered the first B&B I found as I exited the Cork train station, turned on the charm (at least I think I did), and spoke to the lady behind the counter.  As friendly as she was, she had no vacancies and seemed uncertain whether or not I'd be able to find a place to stay at this hour.

Thankfully, she took pity on me and started making phone calls to other B&Bs on my behalf.  While I could tell she was speaking English to those she phoned, I had a difficult time understanding the one-sided Irish phone conversation.  I chose instead to focus on her body language, which continuously suggested "no dice" for ol' SG.  At this point, I contemplated what my "worst case scenario" was, and decided I would sleep in the train station as a last resort.  The lady said she would make one more phone call to a friend of hers who owned a B&B, but had recently stopped advertising and wasn't really in business anymore.  Wouldn't you know, the friend was awake and open to the idea of helping a desperate American.  I jogged down the street and checked in.

Helen had owned this B&B with her husband, Tom, for decades.  While they were no longer in business, she was more than willing to accommodate me for the night.  I was beyond starving as we made small talk for a while, but it would have been rude of me to cut her off and head out.  Although I made it clear that I had no intention of taking a bath, she took an extraordinary amount of time to explain how the bath worked and dismissed my repeated (although courteous) inquiries as to her WiFi password.  I told her my intention was to get up early, see as much of Cork as I could see in a few hours, then hop on the 12:00pm train to Limerick station, where I would meet up with Padraig's parents (Michael and Mary Hourigan).

"Ok then," Helen said.  "What time will you have breakfast?"
"Hmmm...I'm a bit of an early bird.  How about 7am?"
She laughed at this, telling me 7am was far too early for her.  When I suggested 8am, she shook her head.  "I'll have Tom make you breakfast at 9.  That work for ya?"  At this point, I realized that a 9am breakfast was the plan all along, and was not up for negotiation.  Although this would no doubt whittle my envisioned four hours of seeing Cork down to, at most, two, I didn't see any other way to play it.
"9am sounds great, Helen. Thank you."

I considered a jogging tour of Cork before breakfast, but I woke up sore as hell from the mountain climb and decided to sleep until breakfast.  Contrary to the lackluster breakfasts I had at the hostels, Tom cooked me up a three-course Irish breakfast, entertained me with stories the whole time, and kept my coffee cup full.  My two-hour tour of Cork was down to about 30 minutes.  On my way out the door, I introduced Tom and Helen to the concept of a "selfie": 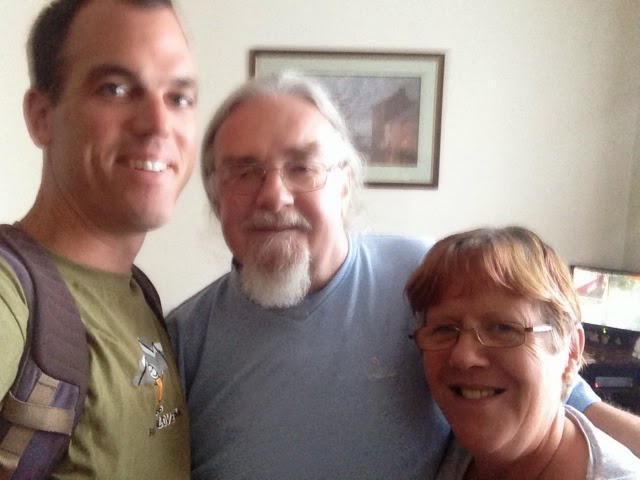 First-ever selfie for Helen and Tom

As I walked out the door, I checked the time:  11:35.  I was coordinating with Michael (age 92) and Mary (age 78) through text messages with Padraig (busy at work) that I could only access with WiFi, which meant that missing the 12:00pm train to Limerick would be disastrous.  I scrambled up a hill to get a view of the city, asked a local to snap my picture (below), and rushed to the train (in flip-flops). 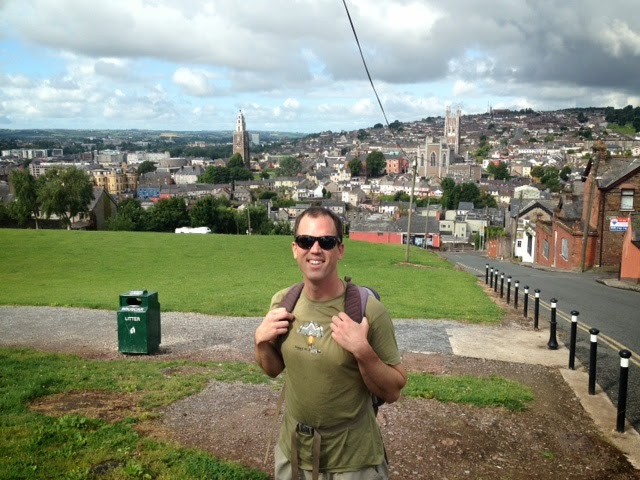 Hurry up and take it!

Once again, luck was on my side as I made it to the train in the nick of time.  I got to Limerick, took a taxi to the University of Limerick (per Padraig's directions), and looked around for two people I've never met before.  Turns out, they found me as Padraig had instructed them to look for "a tall American fella with a backpack getting out of a taxi".  We sat down to have tea at a nearby restaurant, and Mary insisted I order a meal off of the menu there.  I tried to explain Tom's gigantic breakfast to her, but she wasn't listening, choosing instead to order a BLT and chips for me.  We got to know each other for about an hour, and during that time I was encouraged to keep eating 20 times, offered more tea about 50 times, and constantly reminded that my chips would get cold if I didn't start on them.  Any onlookers fortunate enough to witness this would have seen a man trying to eat quickly, chug tea, make conversation, and mind his manners all at the same time.  I think I did pretty well.

On the way to Michael and Mary's farm in Newport, Tipperary, Mary insisted we stop off at the market to get more food for me in case I got hungry later.  We then proceeded to the farm and I got to witness them bringing in the cattle:


Shortly after this, we had tea, then dinner (with tea), then had some after-dinner tea.  I figured that, given the age of my host and hostess, we would make Wednesday an early night.  Not the case.  I wasn't sure what I was in store for as Mary poured us each a "drop of whiskey" (translation: glass of whiskey), then proceeded to pop in an audio cassette of Michael singing Irish songs in 1981, and handed me a booklet with the lyrics to all the songs (about 20 of them). As you may have guessed, I was in store for a good old Irish singalong!  I couldn't believe how much fun it was, and I learned a great deal of Irish history from the songs. 20-some songs and a few drops later, we went to bed well after midnight.