We've all obeyed this dictum for a hundred years, and no one can really understand why.
-Michael Downing


If one thing is clear about Daylight Saving Time (DST), it's that it is unclear.

A recent informal survey of some of the smartest people I know regarding the reasoning behind this biannual jet lag infusion produced the following hypotheses:

These absurd answers, combined with my own lack of knowledge on the issue, have prompted this blog post. What are the origins of DST, and why do we still do it? Here's what I found out:

1. Daylight Saving Time has absolutely nothing to do with farmers. In fact, considering the rise-with-rooster lifestyle, farmers were probably among the last Homo Sapiens to own clocks.

2. Ben Franklin didn't seriously want to do it. Although he was the first to bring it up, he was certainly joking. During his time as French ambassador, Franklin wrote a letter to spoof the lazy French and make them aware of how much daylight they slept through.


The Real History
While the idea had been attempted in a few local communities, credit for implementation at the national level goes to none other than the bold, innovative, and sometimes genocidal early 20th century Germans! This is what most of them looked like: 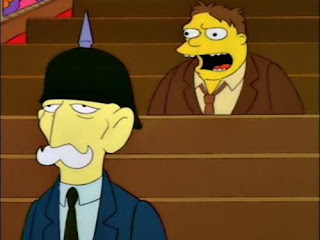 Here's how it went down: shortly after making the bold (and unprecedented) decision to fight a war against THE WORLD, Kaiser Wilhelm, Paul von Hindenburg (of blimp disaster fame), and other jerks in spiked helmets realized they had no plan for any sort of wartime economy, and that they would have to improvise. Here's what they came up with:

1915: Start rationing bread and hope that does the trick. This was a short-term success.

1916: Slaughter millions of pigs, eat them, free up whatever grains the pigs were gonna eat...eat those too. While another short-term success, this had obvious consequences after they ate everything and the war continued. The threat of civilian starvation became constant from this point forward.

1916: Ok let's have everyone eat turnips for a while. As widespread malnutrition set in, there was virtually only one food left and it was ordinarily used as animal feed. Turnip Winter is well-known in German culture today, and is almost certainly invoked by scores of contemporary German parents as part of vain efforts to get kids to eat unsavory vegetables and such.

1916: Maybe we can conserve kerosene if we get everyone to move their clocks ahead an hour? This kinda makes sense if you think about it. The world was lit by kerosene lamps and candles at the time, and if people utilized natural light for an "extra" hour each evening, it could add up to something over time. So the Germans implemented it and sparked a wartime fashion trend.  Like early 90s suburban middle schoolers and Girbauds, soon all of Europe wanted to be down with DST (yeah you know me!).

Was it effective? According to Michael Dowling's Spring Forward: The Annual Madness of Daylight Saving Time, it's impossible to know. Energy consumption varies widely with the weather from year to year, and that's under ordinary circumstances. 100 years ago with the world at war, I'm assuming a mass data project of such little consequence was not a high priority. The world pressed on with DST based on a hunch.

By the time the United States jumped into WWI in the spring of 1917, the DST domino effect had run its course in Europe. Some dude named William Willett proposed American DST, threw out a baseless prediction of $25 million in annual savings, and proceeded to confuse a relatively simple-minded nation with an unprecedented concept.
Those in favor of DST believed working parents would be able to play with their kids for another hour, working women could walk home safely during daylight, and that DST would lead to an increase in social welfare (somehow).
Those opposed employed similar irrationality, arguing DST would prevent people from leisurely mornings and would directly cause overcrowding of transit lines (somehow). Ultimately, in 1918, America decided to give it a shot. And then? A comedy of errors!

Today, DST plods along despite a glaring lack of convincing evidence that it does any good for anybody. In fact, recent studies have concluded the annual "spring forward" leads to an immediate increase in auto accidents, workplace injuries, and even heart attacks (!).

Before conducting research for this blog, I believed that people belonged in one of two camps: Those in favor of DST abolition and the ignorant. Now, however, I understand there is a third school of thought on this issue.

If we were to get rid of Daylight Saving Time, what goes in its place? Nothing? Do we leave the clocks sprung forward or fallen back? Meet halfway? Are we ready to have this debate? When the US toppled Saddam Hussein in 2003, they knew they were getting rid of a dickhead. What they did not prepare for, however, were the unintended consequences of overthrowing an iron-fisted dictator who was able to maintain order by way of assholery...and now we have ISIS.

In my recently-informed opinion, Daylight Saving Time--much like Saddam Hussein--is bad for the world. But the alternative--lengthy debates based on personal preferences while we certainly have bigger fish to fry--could be worse. So we're stuck with it.