Honeymoon Blog Part II: My Wife is a Belligerent Guerrilla With Delusions of Grandeur...but Goshdarnit I Love Her

So the honeymoon continues. We’ve had plenty of views, romance, photos of us arm-in-arm in front of various landmarks….all your stereotypical honeymoon stuff. But you don’t want to read that crap. You’d rather learn a little bit about the recent Sri Lankan Civil War, the terrorist guerrilla who organized the rebels with merciless brutality, and embellished stories about how he's similar to my wife. So let’s do this thing! 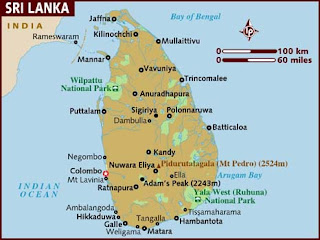 Unnoticed by most of the world, war ravaged Sri Lanka from the late 1970s until 2009, as the Sri Lankan army continually fought with rebel guerrillas led by Velupillai Prabhakaran. In 1976, at the age of just 21, Prabhakaran assassinated the mayor of Jaffna (northern city) and subsequently created the Liberation Tigers of Tamil Eelam (LTTE).

Largely Hindu, Tamils made up less than 20% of the Sri Lankan population. Many, including Prabhakaran, felt slighted and discriminated against by the largely Buddhist Sinhalese, who comprised more than 70% of the Sri Lankan population. After the British ceded control back to Sri Lanka in the late 1940s, the Sinhalese began to implement self-serving laws that made life more difficult for Tamils. For example, universities required less merit from Sinhalese, which led to more prestigious employment prospects, and a growing lack of power for Tamils.

It wasn’t long before other Tamils began to follow Prabhakaran’s lead and to revolt against what they believed to be an oppressive system. As the war raged on, Prabhakaran became increasingly paranoid, maniacal, and violent. Anyone who questioned his authority was killed, and any Tamil Tiger who was even rumored to be considering leaving the group was butchered on the spot.

Before we got to Sri Lanka, I had done a little research on this Prabhakaran character, and it wasn't long before I noticed direct similarities between he and the woman I had promised my life to just a few weeks earlier. After our flight was delayed a few hours, we arrived at our Colombo hotel at 3am. This left us with a scant two hours to sleep before Ranjith, our driver for the duration of the trip, was scheduled to pick us up at 5am.

My efforts to get to bed quickly were thwarted by my wife, who demanded inspection the bed for imperfections. Much like Prabhakaran, she had worked herself into a paranoia, thinking there could be poisonous bugs or maybe someone was trying to assassinate her.

What she found was a couple little black dots. These might have been ticks, might have been venomous ants (does such a thing exist?), or might have been fuzzies off someone's sock. Regardless, the two hours quickly vanished and we faced Sri Lanka day one on zero sleep.

Before I go any further, here's a quick list of places/situations I've deliberately slept overnight in over the past couple years (and yes, I'm 37):
Anyway, the bed inspections didn't stop in Colombo. From there, we traveled to Yala National Park for a two day safari (awesome!). Again, Rebecca Prabhakaran Galvin (RPG) gave our tent (it was much more than a tent...we had electricity, air conditioning, and running water) a thorough inspection, this time deciding we could sleep there if (and only if) she carpet-bombed the premises with bug repellent:

Our sleeping arrangements seemed to take a turn for the better, however, when we drove north to the relatively large city of Kandy. There, we stayed in a relatively fancy and sanitary hotel, and even RPG wasn't concerned about bugs or bacteria. We arrived mid-afternoon, and decided we'd both take a quick shower before paying a visit to the Temple of the Tooth, which is home to the tooth of Siddhartha Gautama (the Buddha)--and is one of the most important Buddhist relics in the world (very cool!).

RPG showered first (of course), so I decided to whip out the ol' smartphone, take advantage of the free WiFi, and read up on the latest Lebron James news (Go Lakers!). I laid down on the bed and scrolled for a couple minutes before RPG emerged from the shower and proceeded to give me the business. "How dare you lay on MY side of the bed!?" She boomed, like we had already agreed what side of the bed would be hers. "You've been wearing those clothes all day! Who knows what bacteria is on them?!"

Although I believed her reaction to be ridiculous, I apologized and kept my head down as I sulked my way to the shower. When I emerged, clean as a whistle, I laid down on the bed again--the other side this time--and continued to read up on Lebron. RPG bellowed again, this time with expletives, "What the fudge!?!?! Now you've ruined BOTH sides of the bed!!"

On July 6th, 2018, less than an hour after she terrorized her husband (twice) for laying down on a bed, an unidentified bird defecated directly onto Rebecca Prabhakaran Galvin's bare right shoulder as we were walking to the Temple of the Tooth. I shit you not.

I've long struggled with the definition of irony, but in this moment I was guessing this was it and--boy howdy--I was a fan! After a series of what Americans might call "end zone dances" (The Ickey Shuffle and The Dirty Bird, mostly), I wiped the laughter tears from my face and realized that "karma" is a Buddhist term that means each action a person takes will affect him or her sometime in the future. For Velupillai Prabhakaran, it took 30 some odd years for karma to bite him in the ass. For Rebecca Prabhakaran Galvin, it took 36 minutes.