I awoke Sunday morning to find the majority of my belonging still soaking wet from the previous day's disaster, and had no choice but to load it all into my still-damp rucksack (backpack) and head for the train station.  After a leisurely stroll through town, I was surprised to find the train station jam-packed with rowdy sports fans dressed in green jerseys, waving flags, and toting cases of beer under their arms.  I asked a small group of them what was going on, and they enthusiastically explained to me that it today was a national Hurling semifinal, and Limerick was playing Kilkenny later that day in Dublin.  Further, I learned that Limerick was an underdog who rarely made it this far in the playoffs, and Kilkenny was the perpetual contender with the iconic coach and multiple championships.  For my local buddies, imagine if the Lions were playing in the NFC title game vs. the Packers in Chicago, and we were all boarding a train to go to the game.  It was that kind of vibe.  As I type this, I am kicking myself for not taking any pictures of this scene.

Normally, I like to update this blog while riding on the trains.  WiFi is reliable, it's normally quiet, and I can get some quality writing and reflecting done.  Not the case on this train ride, and I didn't mind one bit.  It was a lot of fun to watch these people party and to feel the energy of their big day.

I arrived in Dublin (sweet home, Dublin), and Padraig picked me up from the train station.  We drove to his house, where I got to meet his wife, Karen, and his two year-old son, Michael.  We got to know each other over some tea (surprise, surprise!), and Karen was more than willing to allow me usage of her washer/dryer so that I could remedy my wet/stinky clothes situation.  Looking back, this was huge.  After an hour or so of chatting, the Hurling match was about to begin and we sat down to watch.  What a fantastic sport to watch.  I was amazed at how riveted I was by the action, how I quickly aligned myself with Limerick (because of my train experience, Padraig was pulling for them, and long live the underdog!), and how I loathed those bastards from Kilkenny despite knowing almost nothing about them or their town.  In the end, Limerick lost a heartbreaker that went down to the final seconds.

After the match, we had dinner, got to know each other a little more, and went over the highlights of this here blog.  I think they liked it. Then we took a few pictures to commemorate this visit: 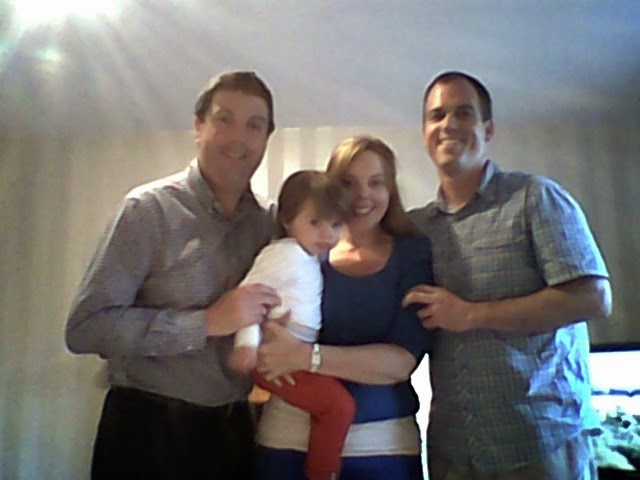 Padraig, Michael, Karen, and me 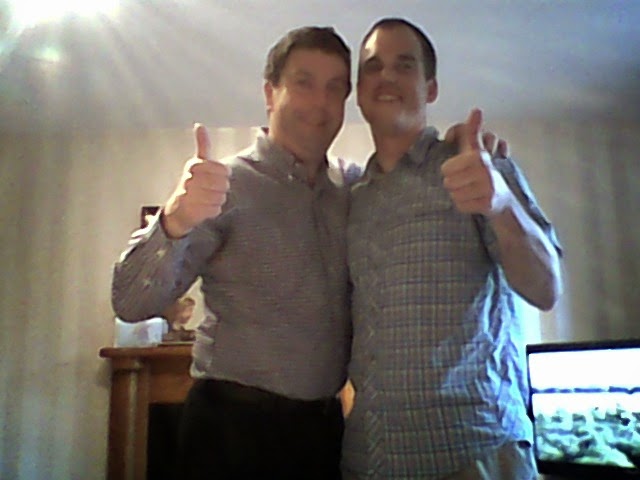 Padraig and I...for some reason, I started taking a lot of "thumbs up" pics from this point on 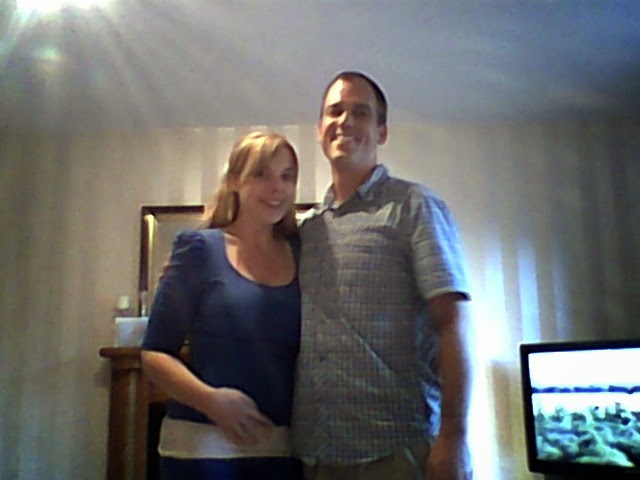 In yet another act of hospitality and generosity toward me, Padraig had set me up with accommodation that night in Dublin.  As I mentioned in previous posts, he runs an international school for college students, and had a hookup on a vacant dorm-style room in the city.  He dropped me off there, introduced me to a few students, and I was set for the night.  I considered a visit to the pubs, but decided instead to get some sleep and catch the early train to Galway the next morning.
Posted by Sean at 12:27 PM