When sharing a room and a bathroom with four other people, the shower schedule can be pivotal.  I had a big day ahead of me, and wanted to be the first one up so that I could shower and get a move on before anyone else even thought of it.  Successfully, I awoke at 6:30am, took a 45 second shower, and was out of the room as quiet as a mouse.

My plan was to visit these Galvins, see if I could make any discoveries, and catch the 11am bus to Dingle.  It was 7am when I left the hostel, so I figured I had plenty of time...even if the shops didn't open until 9. I walked out of the hostel into a ghost town, and wandered around for at least 90 minutes before I saw another human being, who turned out to be Stephen from the hostel, on his way to work!

"Stephen, my man, what time do things get started around here? I have some family to track down!"
"Good morning Sean, today is a national holiday (he said something I couldn't understand...sounded like "Bank Day").  Shops won't be open until at least 10, if at all today.  The one place that will definitely be open is Ladbrokes, and a man named Martin Galvin works there.  Try him."

It turns out that Ladbrokes is a popular business in Ireland.  What it is, is a legal bookie who takes bets on football, horse racing, and anything else that locals want to bet on.  Based on my understanding of the Irish dialect, Ladbrokes means "broke boy", which makes sense to me.  I walked into Ladbrokes at 10am and addressed the man behind the counter:

"I'm looking for a man named Galvin." I said, like a detective.
"Aye, I'm Galvin"
"So am I!" And I showed him my passport.  Thankfully, Martin Galvin didn't think I was weird.  We talked for a while, and ultimately concluded that we are not family.  Cool dude though: 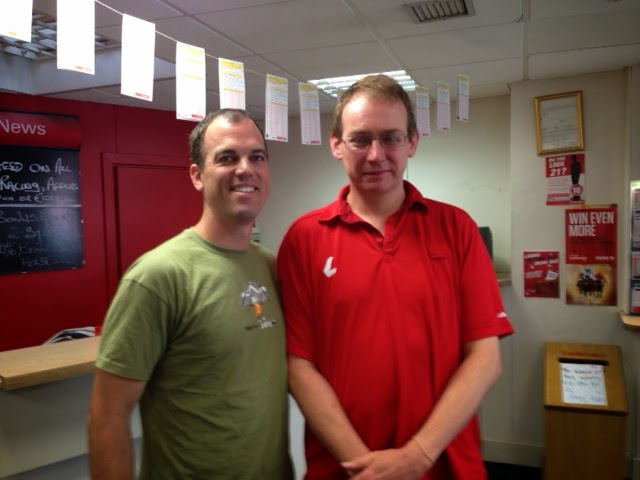 As I was walking out the door, Martin stopped me, "You know, there is another Galvin family in town that I'm not related to.  They own a bar called Gally's, which is about a 10 minute walk from here."  Martin pointed me in the general direction of Gally's, and I decided to head over there.  I still had enough time to get to Gally's, get shot down, and get to the bus and to Dingle.

20 minutes of speed-walking later, I realized I was far from town and at the point of no return.  I was certain I had followed Martin's directions, but where the hell was I?  I popped into a petro station (that's gas station to you), and asked for directions to Gally's.  Turns out, Martin's sense of direction was spot on, but he had confused walking with driving a formula one racecar.  I was headed the right way, still had a ways to go to get to Gally's.  The lad behind the counter in the petro station (all boys younger than you are "lads" in Ireland) gave me directions to get there:  "Go through this roundabout, through a smaller roundabout, turn right at the next roundabout, follow that road as it bends, then make a left at the roundabout past the petro station.  Gally's is on the corner."

As spectacular as I've heard Dingle is, I decided to brave the long walk and roundabouts, and take a gamble on Gally's.  Maybe they'd give me a free pint on account of my surname.

40 minutes after leaving Martin, I arrived at Gallys drenched in sweat.  I composed myself for a second, thought about what to say, decided that I couldn't plan for this, and walked in.  A young girl was working behind the bar (where boys are "lads", there is no similar word for girls...or at least I haven't heard one yet).  "Will you have a drink?" She asked.
"Uh, well, I come for a different reason.  My name is Sean Galvin, I come from the states, and I think I might be related to the Galvins that own this place."  I was somewhat satisfied with this intro.
"Oh that's nice," she said.  Not exactly the response I was looking for.  I had to keep pushing.
"Are you a Galvin?" I asked.
"No, but they are." She pointed to a group sitting by the corner of the bar.  The same holiday that had set me back a few hours earlier in the day had ended up helping me out, as the Galvin family was leisurely having coffee together.  I walked over and introduced myself.
"Hello, my name is Sean Galvin.  I am from the United States, and have recently been researching my ancestry."  To corroborate my story, I flashed the passport to the group, and I instantly had their attention.  They got a me a chair, poured me some coffee, and allowed me to join the group.

To make a long story short, these Galvins had recently taken an interest in their own ancestry, with a particular interest in what happened to those that emigrated to the America.  What luck.  I met Katherine "Kitty" Galvin, Brenda Galvin, and Tim Galvin.  Tim, who was the most vocal in the group, noticed my middle name (Timothy), and asked me to sketch out my family tree to the best of my ability.  He did the same, and we looked for a link.  Basically, it all boils down to John J. Galvin, born 1866 in Co. Kerry.

We couldn't prove a connection right then and there, but given the family tree sketches, it seems quite likely that a connection exists.  We had another cup of coffee and got to know each other.  At that point, I realized that Dingle was not going to happen, and I was fine with that. 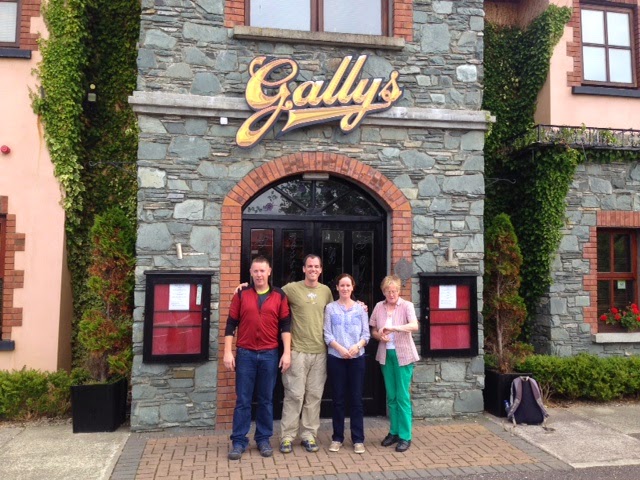 From left to right:  Tim Galvin, your boy, Brenda Galvin, and Kitty Galvin

I could go on and on with details of these wonderful people, but I really need to get this post up and move on with the day.  Tim insisted on driving me around to show me the family land, explain the history, and drop me off back in town.  We agreed that a visit to the church to look at baptism records in the morning was a good idea, and somehow a morning climb of the tallest mountain in Ireland worked it's way into the mix (more on this in the next post).

I got back to my hostel, had a few pints with my German roommates, discussed Hitler with them (they brought it up), and called it a day.  And what a day it was!