Saying nothing sometimes says the most.
-Emily Dickinson

We're now at a point where noise is almost unavoidable. As I type this in my mother's backyard, I hear pleasant sounds of nature: birds singing, leaves rustling in the breeze, and the occasional bumblebee. In addition, the M-14 expressway, about a mile from where I sit, constantly hums in the background. Two houses down, a power saw has been in intermittent use for the past two hours, and two neighbors just began mowing their lawns. To top it off, some lady set off her own car alarm and apparently doesn't know how to disengage it.

A few months ago, I wrote of learning to not let car alarms infuriate me. More recently, however, I've learned I don't really have a choice in the matter. The human body has evolved to constantly scan the environment for dangers and opportunities, thus it subconsciously reacts to every stimulus it encounters. In the case of noise, sound waves vibrate tiny bones in the ear, and these vibrations fire electric signals directly into the auditory cortex of the brain.

Even while we sleep, environmental noise causes stress hormones to be released, and recent studies have found that people who live in cities experience chronically high levels of these hormones--particularly cortisol. Cortisol increases blood pressure, which contributes to heart disease and cellular damage, and has a debilitating effect on the immune system. As Michael Finkel writes in The Stranger in the Woods: "Noise harms your body and boils your brain."


For evidence of this brain-boiling, look no further than a recent global survey by the World Health Organization which concluded that people in wealthy countries--equipped with expressways, power tools, and Steve Miller's Abracadabra--suffer from depression as much as eight times the rate they do in poor countries where the sounds of nature are more common. Further, suicide rates have shown to increase alongside economic prosperity. To paraphrase Sebastian Junger, rather than buffering people from depression, increased wealth in society seems to foster it.

Silence is Beyond Golden

You don't need to voyage to a Tibetan Monastery to win your brain back from lawnmowers and car alarms,  but you do need to regularly seek out a soothing environment. Researchers have found that a daily fifteen-minute walk in the woods will cause significant decreases in cortisol, and that two hours of silence per day prompts cell development in the hippocampus--the region of the brain responsible for memory.

Other studies, including one conducted at the University of Michigan titled Your Brain In The Woods vs. Your Brain on Asphalt, have found that time immersed in nature makes us calmer, less depressed and anxious, with improved cognition and memory. In other words, silence makes us smarter and happier. Evolutionary psychologists believe our bodies relax in quiet, natural environments because our senses evolved there and thus remain calibrated to them.

The burgeoning world of neuroscience agrees. An experiment at New York University placed 20+ Buddhist monks and nuns inside MRI machines, tracking brain activity while they meditated. The result? When we choose to sit in silence, the brain is as active as ever. What changes is where the activity occurs. While talking, texting, and keeping busy, the activity occurs in our cerebral cortex--which is a thin layer on the brain's surface. When we experience silence, the cerebral cortex rests, allowing deeper and more ancient brain structures to come alive. Those of us living busy, noisy and distracted lives almost never get access to these areas. As Finkel brilliantly writes, "Silence, it appears, is not the opposite of sound. It is another world altogether, literally offering a deeper level of thought, a journey to the bedrock of the self." 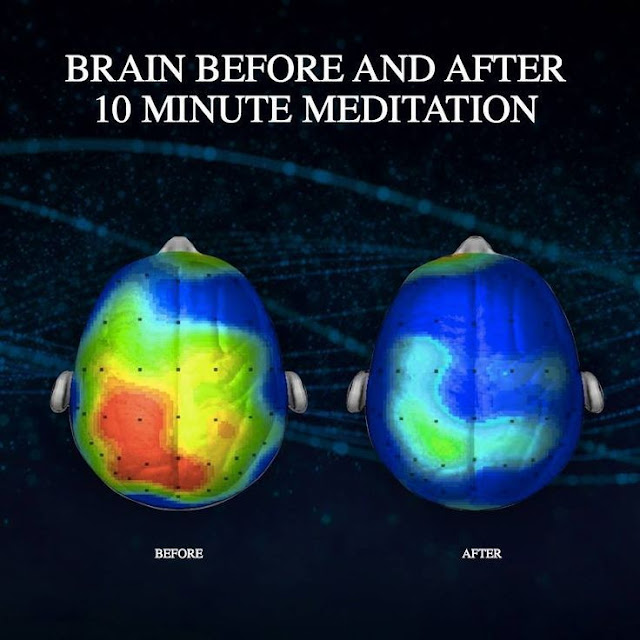 Despite the obvious benefits, few of us seek out silence. In fact, a University of Virginia study recently found more than half of men and at about a third of women would rather endure painful electric shocks than to sit in silence for 15 minutes. How can this be? Too much technology? Too many obligations? When we were hunter-gatherers, the average Homo Sapiens needed about 4,000 calories of energy to get through the day. This was pretty much food and a daily campfire. Today, Americans burn an average of 228,000 calories per person per day to feed our stomachs, propel our cars, charge our devices, and to keep our homes between 68 and 72 degrees (I'll be damned if I put on a sweatshirt or open a window!). We're burning 60 times more energy than our ancestors. Is life 60 times better?

Perhaps this is all a result of the disease of more. In our modern culture, as my man Yuval Noah Harari points out, the idea seems to be that if we have a problem we probably need more stuff. To get more stuff, we must produce more.

We don't have to buy into this idea. 2,500 years ago a Chinese fella named Lao-tzu wrote the Tao Te Ching, and there's a reason it's the 2nd most popular book in the history of the world (next to the Bible). "Those with less become content," says the Tao, "those with more become confused."