Tuesday: Carrauntoohill and Back on the Train

After a few pints with my new German friends on Monday night, we returned to the hostel to get some sleep.  Somehow in all the melee of meeting family, getting excited, hugging, and driving around with Tim, a plan was made to climb to the top of Carrauntoohill, the tallest peak in all of Ireland.  Honestly, I don't recall agreeing to this, or weighing the options of whether or not it was a good idea...it somehow just became the plan and I never questioned it.  Well, I didn't question it until halfway up the mountain, that is (more on this in a minute).

In the short time I got to know Tim Galvin on Monday, I learned quite a bit about him and his hobbies.  Great dude.  Turns out, his father was a relatively famous footballer in County Kerry (known as "Gally" in the football world, which is where the pub gets its name), and so was Tim.  Further, he has skydived over 700 times, has climbed mountains all over the world (planning on Everest in 2016), and even raced a greyhound for charity back in the 90s  (victory!).  He told me that Carrauntoohill was just over 1,000 meters tall, so I figured out I was in for a decent hike to the top.  If I learned nothing else on Tuesday, it was that there is a big difference between a hike and a climb.

Tim picked me up promptly at 7am, providing me with coffee, water, bananas, energy bars, and even a delicious chicken wrap sandwich for after the climb.  He had been up since 5am getting things ready.  I marveled at his hospitality, and the fact that I was ready to make this climb on an empty stomach and figure it out nourishment later.  We drove about an hour to the trail head, steadily chatting away about our respective lives, ambitions, and families.  Our familial link was still unproven, but damn did we have our similarities.


After about 800 meters of a leisurely incline, we arrived at Carrauntoohill's rocky slope and I realized this was not going to be a walk in the park.  Tim was moving quickly, and I hustled to keep up with him.  He paused every now and again to take my picture and tell me stories about the history of the area (British brutality in the early 1900s, an American WWII plane that crashed into the side of the mountain--possibly assembled in Wayne, MI, etc.).  I listened, hoping that he would keep talking so I could catch my breath.  In all, Tim talked 95% of the time to my 5%.

The rain picked up a bit, and we got to a point where the HIKE became a CLIMB.  "Up this way, plenty of grips here." Tim said, casually.  Grips?  What had I signed up for?  I have seen rock climbing on TV and in pictures before, but I've never experienced it.  Not even at those indoor facilities in American suburbia. 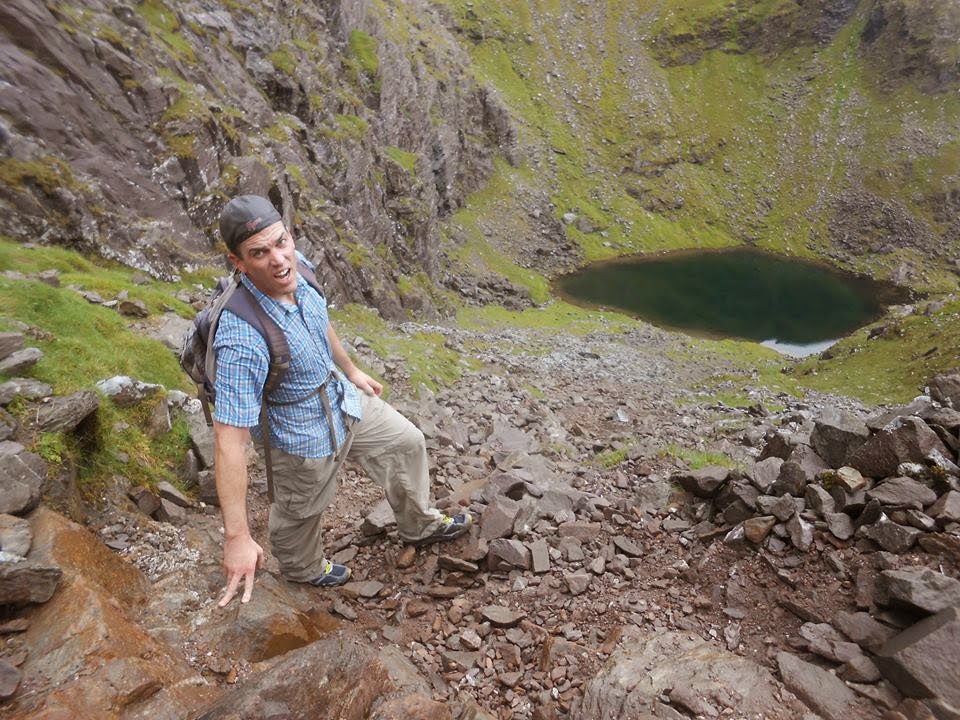 "Wait, you mean I have to scale this rock wall?"

The first wall wasn't that tall, and was actually kind of fun.  Had I fallen off, I would have probably ended up with some scrapes, bruises, and a funny story to tell.  Not so bad.  We continued up and found ourselves at a point where three distinct routes to the top appeared before us:

Tim: Ok Sean, there are three ways to go from here.  I wouldn't want to go to the left without climbing equipment, and the middle route is probably to slippery because of the rain.  We'll go to the right here, it's called O'Shea's Gully.
Me: Why do you call it that?
Tim (nonchalantly):  Because a man named O'Shea took this route in 1968 and slipped and fell to his death. Same year I was born.

With that, Tim chuckled and started up O'Shea's Gully.  At this point, I decided I had three options:
1.  Tell Tim thanks, but no thanks and head back down to safety
2.  Yell to Tim and ask him how many people have perished on this route since 1968 (less than five and I'd feel better)
3.  Say nothing, follow along, and hope for the best

I needed to think long and hard about this, but Tim was moving quickly and the rain was coming down.  So, after thinking short and soft, I chose option three. 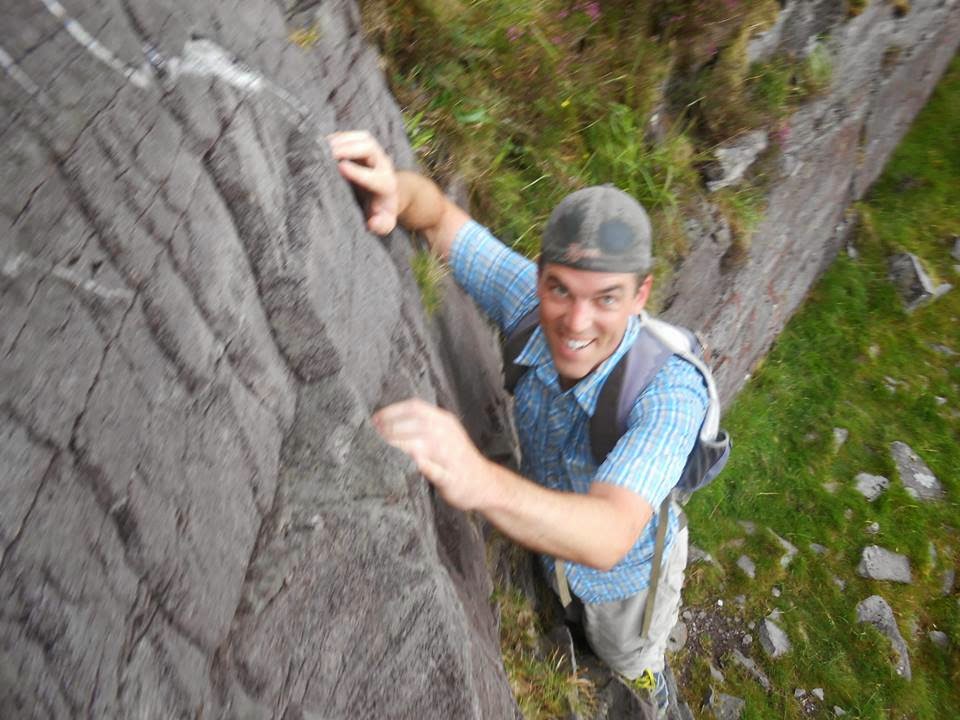 This is the look of a man smiling through fear.

At some point along the way it crossed my mind that, if there were ever an opportune time for someone to kill me and get away with it, it was Tim and it was now.  The only mention I made of climbing a mountain was to the Germans the previous night, I didn't know where I was going, and they probably didn't understand me anyway.  Fortunately, Tim either never thought of it himself, or chose to let the opportunity pass.  As you may have guessed, I survived the ascent up O'Shea's Gulley and to the top of Carrauntoohill.  Great experience, great views, and a great guy Tim is for taking the time to guide me all the way up. 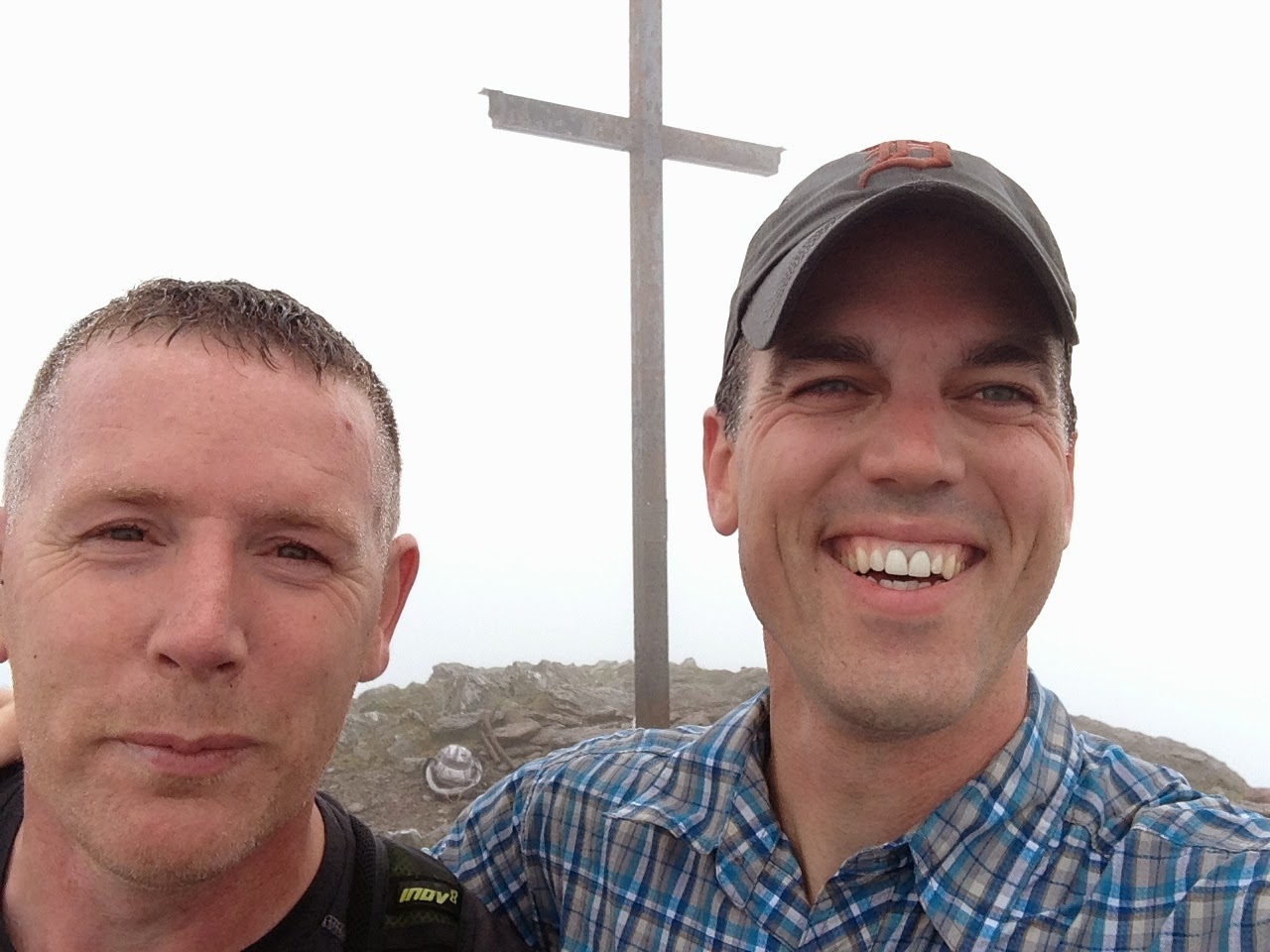 New cousins on a mountaintop 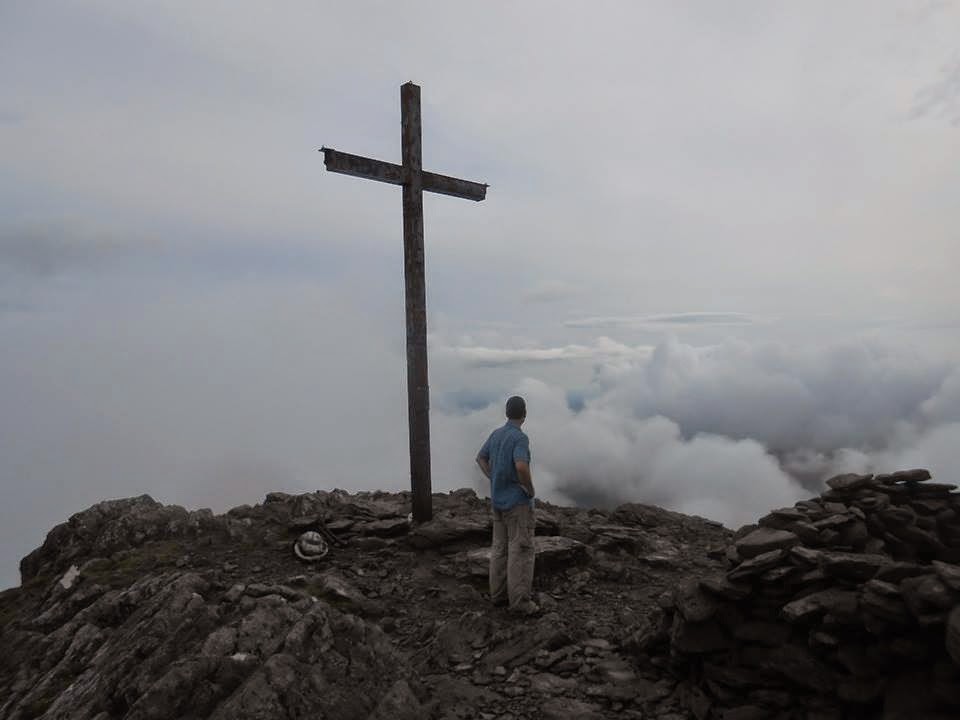 Above the clouds atop Carrauntoohill

As I believe is common with most mountains, the descent is far less strenuous than the ascent.  This allowed Tim and I to talk (with a ratio approaching 50/50), crack jokes, and take pictures.  We stopped at an area known as Heaven's Gate, and took in a view of the countryside: 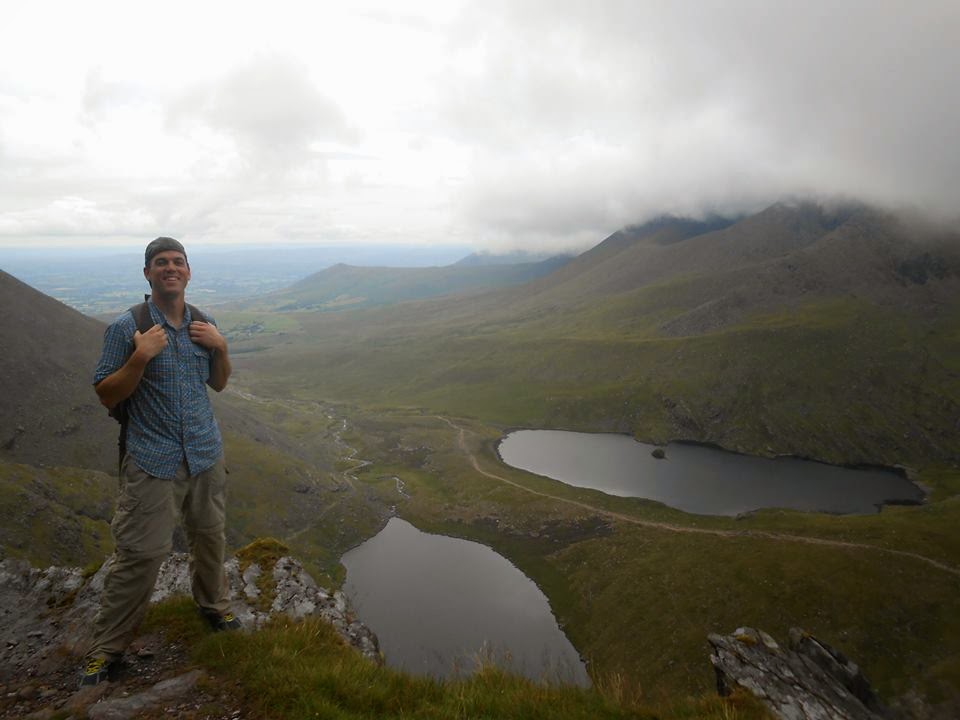 Back on the ground, Tim had to hustle off to work at Gally's, and was kind enough to drop me back in town so that I could plan my next move.  I had gotten a text from Padraig, informing me that his parents (my grandmother's first cousin and his wife) would welcome me at their home in Co. Tipperary the following afternoon, and I needed to figure out transportation.

Before I left Tralee, Tim and I went to the church in an effort to analyze baptism records and prove whether or not we were related.  The lady at the church knew Tim well (as does everyone in Tralee), and informed him that she could not allow us open access to the records room.  The reason, she explained, was that too many people (mostly Americans) had physically cut records right out of the pages of the books in there, and people needed to make supervised appointments.  Damn Americans.  Tim made an appointment to do his own research a few days later, and told me he'd let me know what he found out.

Tim gave me a lift to the train station, bought me a coffee, and bade me farewell.  It would have been premature to head to Tipperary, so I decided to squeeze in a quick visit to Cork, which is located on the southern shore of Ireland.

As I rode the train toward Cork, I found myself wondering why Tim had been so good to me.  Sure, we have the same last name and a legitimate chance of being related, but I was still just some dude who walked into his bar on a holiday and started asking questions.  Based on that, he adjusted his whole schedule to take me to a mountaintop, feed me, look after me the whole way, and drive me around to places I needed to go.

I arrived in Cork at about 10pm with no accommodations, no food in my stomach, and no worries whatsoever.  My plan was to find a place to stay, find something to eat, get some sleep, and tour Cork for a few hours in the morning before meeting the other side of my Irish family.

Oh yeah, and I was covered in mud from the hike.  This drew a few stares at the train station.