Sugar is the New Stalin

Emancipate yourselves from mental slavery, none but ourselves can free our minds.
-Bob Marley, Redemption Song

You probably haven't recently thought to yourself, "I wonder what, if any, is the overlap between Stalin's tyrannical rule of the 20th century Soviet Union and the sugar industry's relationship to the current obesity epidemic?" Don't worry, I've got you covered. I'll even weave in some March Madness for entertainment purposes.

If there were a March Madness-style office pool for "worst human ever," the most popular pick is probably Hitler. Hitler's atrocities are well known, he had a trademark look (swastika and ridiculous mustache), much like North Carolina's basketball pedigree is well-documented. UNC frequently plays on primetime against Duke and other longtime rivals, and celebrated alums such as Michael Jordan and Rasheed Wallace are often in attendance.

Stalin, who I've lampooned before, is more of a Gonzaga. Yes, he's a #1 seed and not exactly on a surprise run, but there is less certainty around Joe Joe. The scale of his atrocities (such as how many Ukrainians he starved) are still debated, and the facts that do exist came to light long after his death. Similarly, even long-time college basketball enthusiasts such as myself couldn't tell you what conference Gonzaga plays in or who their arch rival is. Stalin's atrocities (much like sugar's) live in a Gonzaga-like uncertainty.

By the way, if such a bracket pool were to come up, I'm going with Uday Hussein as a sleepy five-seed to take the crown.

OK enough hoops. Let's get down to it.

Stalin ruled the then-Soviet Union from 1922 - 1953 (before just kinda mysteriously dying) and was pretty much a cheat and a liar the whole time. A few highlights:


At any rate, Stalin was able to pull this off largely because of the cult of personality he created early on. Cult of personality refers to the usage of propaganda, mass media control, and political thuggery to create a larger than life, often worshiped image. Soviet children grew up believing Stalin was their protector, their source of anything good, and that he was to be adored.

This cultish brainwashing was so unavoidable for Soviet children that when they became adults, they were unable to know any other reality. So there's 31 years of Stalin for you.

Let's pivot and look at sugar:

Again to deliver a March Madness perspective, let's look at cigarettes and sugar. In terms of damage to your body, cigarettes are Hitler and North Carolina and sugar is Stalin and Gonzaga. We're well-aware of how bad cigarettes are, but sugar has been living in a confusing Stalin-zone since 1967, when the Sugar Research Foundation paid Harvard scientists about $50,000 to conduct BS studies that would find saturated fat--not sugar--to be responsible for heart disease and obesity.

As obesity related illnesses have annually killed millions of people in the 50 years since the Harvard study, big sugar companies like Coca-Cola and Nestle have thrown millions upon millions of dollars at various public health organizations and studies to--at the very least--keep us confused as to what's making us fat.

Look no further than the food nutrition label on anything in your cabinet to see the Stalinesque brainwashing in action. Today, when you look at the nutrition facts, there will be government recommended daily amounts of each nutrient. You will not find a daily recommendation for sugar:

It may be news to some that sugar is the worst thing to happen to public health since the plague, but countless recent studies have found that eating too much fat doesn't necessarily make us fat, but eating too much sugar definitely does. Looking at the top ten causes of death in the US, a high-sugar diet (aka, the typical American diet), is a direct contributor to at least six (heart disease, cancer, stroke, alzheimer's, diabetes, and kidney disease), and you wouldn't necessarily be considered a lunatic if you tried to argue sugar has at least an indirect hand in the other four (lower respiratory disease, accidents, influenza/pneumonia, and suicide).

One striking difference between these two ruthless killers is that many of Stalin's kills involved horrifyingly slow starvations, while sugar's MO is directly responsible for the first time in human history that there is too much food, and overconsumption is the problem. For those who enjoy graphs as I do, I grabbed a few from this health blog (worth reading): 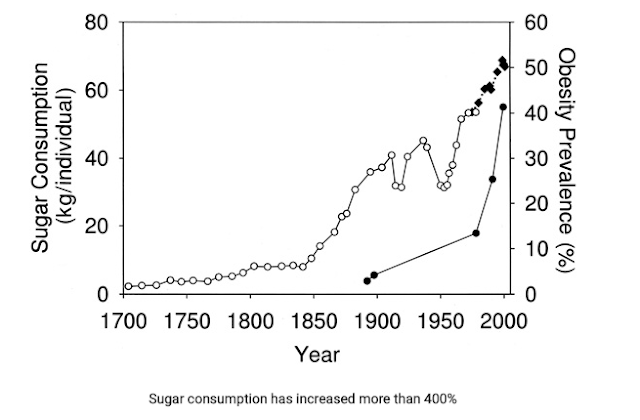 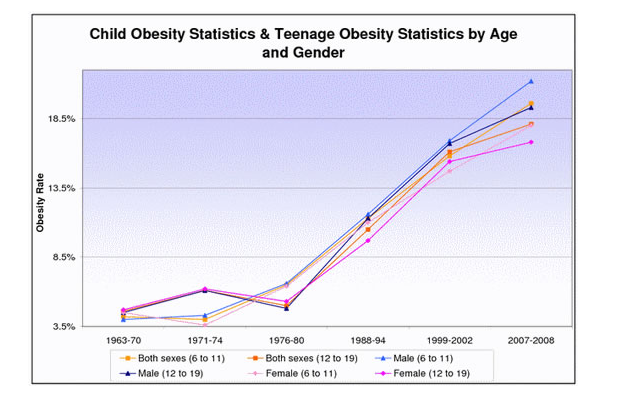 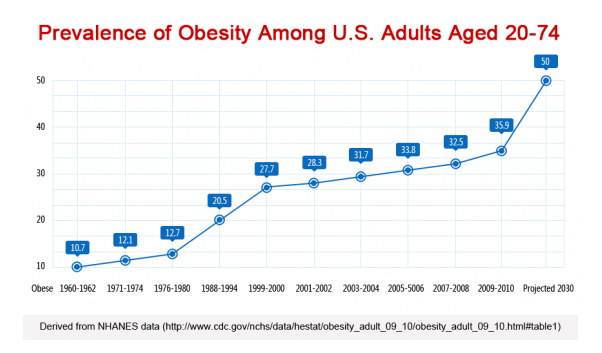 To bring this puppy full circle, I used to run two marathons per year (2013-2016) while eating whatever was in front of me and "doing my best" to eat vegetables now and again. I weighed well over two bills and just assumed that's how things were supposed to be until a nasty case of plantar fasciitis forced me to stop running for almost a year. During that time, I read a few books and decided to stop eating sugar and carbs in an effort to offset the new sedentary lifestyle. In three months of inaction, I lost thirty pounds, had to buy new jeans, and I found myself with more energy and focus throughout the day.

Which brings us back to Stalin. It's weird to think about the life of a Soviet peasant, and the type of courage it probably took to even think there could be another way. Whereas Stalin died before communism fell, other communist dictators weren't so fortunate.

Nicolae Ceasescu (chow-CHESS-koo), Romania's mustache-less version of Stalin from 1965-1989, was essentially overthrown during a speech in the middle of Bucharest on December 21st, 1989. You can see it in the video below at about the 2:15 mark, homeboy is delivering a seemingly routine speech complete with Trump-like statements such as "I believe in the best for Romania!" and "Hey this whole me being in charge thing is gonna continue and thus everything will continue to be rad!" Then, a small group (probably aware of the recent fall of the Berlin Wall and the revolutions in other Eastern Bloc countries) starts to boo and jeer. Please, do yourself a favor and watch the look on his face when this happens:

For those curious as to what happens to Ceasescu, after 80,000 Romanians collectively decided they don't buy his bullshit anymore AND that there are way more of them than there are of him and his cronies, they force themselves into Ceasescu Tower (or whatever), he escapes via helicopter, then is captured, tried, and executed (with his wife) four days later.

Here's my point with all this: If Romania can collectively shift their mindsets and overthrow their Stalin, is the same thing possible for us with Big Sugar? How can we collectively become aware of this imaginary order and Ceasescu the sugar industry?

I'll tell you how. Take the Fed Up 10 day challenge , Ceasescu your personal sugar industry for a week and a half, and see how you feel. I blogged about my experience about six months ago when I was eight days into it. A sip of soda is a sip of Stalin. It doesn't have to be this way!