You didn’t work out this morning because The Resistance got the best of you. The Resistance kept you up late, encouraged you to have another drink, and to stay in your pajamas while mindlessly poking away at your Samsung Galaxy.
In The War of Art, Steven Pressfield defines The Resistance as anything that prevents us from our goals and ambitions. My take? The Resistance is a big time jerk, and is constantly working against us. Like the T-1000, Jaws, or any other Hollywood villain, The Resistance is in constant pursuit.
The good news: We all have a built-in weapon to use against The Resistance, and it is called willpower.
The bad news: Willpower seems to come and go. Willpower depletes over time and, once we run out, The Resistance takes over. Now we need a vacation, a new year, or some sort of extraordinary event to alleviate The Resistance and get us back on track.
The answer: Develop one or two Keystone Habits and get into the Willpower Groove early in the day. The Resistance can't touch us there.

Quick Profile of The Resistance:

The Resistance can take on an infinite number of forms. A few of the most popular are:

Procrastination
This is the most common and easiest to rationalize. To paraphrase Pressfield, we don’t tell ourselves, “I’ll never write my symphony.” We tell ourselves, “I’ll write my symphony tomorrow.”
Self Doubt
The Resistance loves to point out why it probably won’t work out.
Excuses
The conditions aren’t quite right, The Resistance rationalizes. If only we were older/younger/taller/less busy...
The Wrong Crowd
Those friends of ours who are constantly complaining and stirring up unnecessary drama? Brought to you by The Resistance.

Our Silver Bullet: Willpower. The Resistance is particularly weakened when we are in the Willpower Groove:

The Willpower Groove
All performers know they need to warm up in order to be at their best when it’s time to take the stage. Steph Curry arrives to the arena hours before tipoff to get his jumper into a groove, Adele warms up her vocal chords, and Usain Bolt goes for a light jog. These performers are getting into a groove to ward off their own versions of The Resistance. Curry, perhaps the greatest shooter in basketball history, has put up millions of shots in his life, but still needs to go over his habitual form to get into his groove.
As for us, The Willpower Groove is available to us upon waking up, and becomes less available as the day wears on.

Keystone Habits
Fighting The Resistance across all aspects of our lives will ultimately wear us down. This is why complete overhauls of our lives rarely take hold, and less than 10% of New Years Resolutions are sustained. The key to defeating The Resistance is to get into the Willpower Groove early in the day by developing what Charles Duhigg refers to as Keystone Habits.  These habits can--and should--be almost embarrassingly attainable, rigging the rules so that we will routinely defeat the Resistance early, get momentum, and kick ass on the reg.

Keystone Habits have the power to permeate our minds, disrupt our thought patterns and start a process that—over time—transforms everything. Consider a few:
Making Your Bed - Research shows that this simple task, performed each day, sets the Willpower Groove in motion. We check off the first item on our to-do list and tell The Resistance to eff off. Then we make some eggs.
Morning Workout - According to science, people who implement a morning workout routine quickly start eating better, become more productive at work, smoke less, use credit cards less frequently, and feel less stress. I don’t think I need to tell you how much The Resistance loves to push bullshit food, distractions, Marlboros, impulse buys, and stress. Do I?
Healthy Breakfast - Two eggs and a banana = A swift kick to The Resistance's junk
Audiobooks - These have been a game changer for me. Consider downloading Amazon's Audible app and learning something while you commute/work out. The Resistance will be floored. A few screenshots of my Audible library are below, I've consumed all these in the past six months while driving to work: 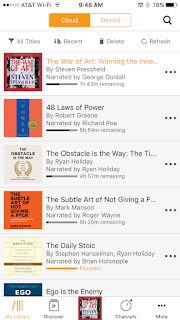 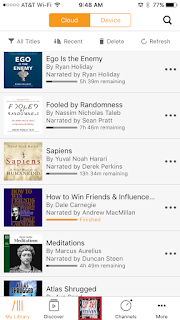 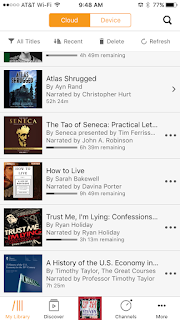 Again, Keystone Habits develop when they are simple and easy. The Resistance loves it when we set lofty goals and try to completely overhaul our habits. When to begin? The Resistance says tomorrow and is terrified of right now.