5 Minute Read
We face danger whenever information growth outpaces our understanding of how to process it.
-Nate Silver

In addition to our status as the only animals able to think about the future, we Homo Sapiens are the only earthly beings able to ask questions. In The Upright Thinkers, Leonard Mlodinow writes, "Chimpanzees and bonobos can learn to use rudimentary signing to communicate with their trainers, and even to answer questions, but they never ask them."
For all other earth residents, things are just what they are. We, however, are in constant pursuit of why and how.

Roughly 10,000 years ago, we figured out a couple of nature's secrets and acquired the ability to farm and to domesticate animals. As a result, we no longer needed to hunt and gather our food and could begin to hunt and gather knowledge. This was a big step.

About 5,000 years ago (3,000 BCish), the defining trait of human civilization appeared--the written word. Once we could write shit down, we could build upon the knowledge of those who came before us and, ultimately, outgrow the limitations of individual knowledge and memories. Awesome!
500 or so years after that, we decided to create a profession dedicated to passing on knowledge, and we have evidence of the first schools in Mesopotamia. So to all you teachers out there, your profession is roughly 4,500 years old. Not quite as ancient as farmers and prostitutes, but a cornerstone of humanity nonetheless!

Jumping ahead a couple millennia, we see the emergence of Homer's Odyssey, the Bible, and others by Plato and Aristotle that you may have heard of. But even then, books were luxury items produced one at a time by scribes, and would have cost roughly $20,000 a piece in today's money.
The pursuit of knowledge, although possible, was still futile until 1440 when a German fella named Johannes Gutenberg invented the printing press. Now, books could be mass-produced, and that $20,000 copy of the Bible you had your eye on quickly became $70. Game changer.

Information quickly became ubiquitous, but competing authors and publications often contradicted each other. This had consequences: Martin Luther's Ninety-five Theses (1517) sold over 300,000 copies (bestseller!), and promptly dragged Europe into a series of wars that lasted over a century (1524 - 1648).

Gutenberg's printing press also allowed for mass production of errors. Look no further than what we now refer to as the Wicked Bible, published in 1631, which omitted one measly word and ended up causing all sorts of tomfoolery in London:

Regardless of whether you're more offended by 124 years of butchering each other in the name of God or by "honey, I won't repeat myself. God commands me to bang whores, and whores I shall bang!" Gutenberg's invention ultimately revealed a human characteristic we were previously unaware of: When presented with an overwhelming amount of information, we instinctively take a shortcut. We digest what appeals to us, disregard the rest, and proceed to high-five those who share our views. Compounding this, we are embarrassingly bad at separating truth from misinformation. Or, as Nate Silver puts it, differentiating signal from noise.


Today, more information is created in a single day than one of us can consume in a lifetime. Every minute, the world receives:

Our brains, wired to detect patterns and draw conclusions, are dangerously overmatched against all this noise. Consider this: According to Sapiens author Yuval Noah Harari, terrorists killed a total of 7,697 people in 2010 across the globe. Don't get me wrong, that blows. But comparing that to the 3 million people killed by obesity-related illnesses the same year puts things into perspective. Here's what that looks like on a standard bar graph: 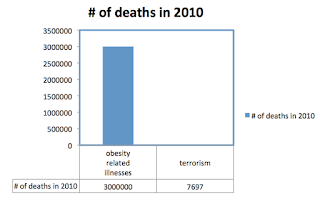 Why isn't everybody talking about this? While we squabble about ISIS and immigrants, sugar quietly kills us all.

While it doesn't look like we'll be putting the genie back in the bottle on this one, we Sapiens are equipped with methods to deal with this information onslaught:

1. We get to decide what matters
Considering the bewildering lengths companies will go to acquire our attention, this can be difficult. Exercise, meditation, and/or a simple stroll through nature can all help with this.

2. We get to be ruthless to what doesn't
Put another way, you don't have to have an opinion on issues you've deemed irrelevant.

For what does matter, let's get our Nate Silver on and identify the difference between hedgehogs and foxes:
Hedgehogs are hunters, always out for the big kill, whereas foxes are the gatherers. Let's be foxes.